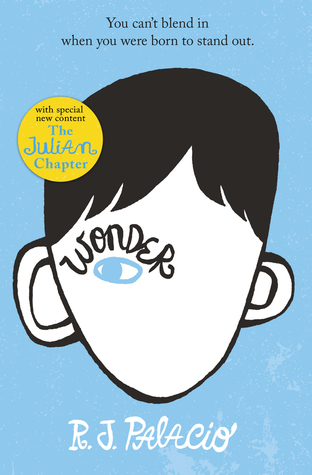 Goodreads Synopsis:    You can't blend in when you were born to stand out.
My name is August. I won't describe what I look like. Whatever you're thinking, it's probably worse.August Pullman wants to be an ordinary ten-year-old. He does ordinary things. He eats ice cream. He plays on his Xbox. He feels ordinary - inside.But Auggie is far from ordinary. Ordinary kids don't make other ordinary kids run away screaming in playgrounds. Ordinary kids don't get stared at wherever they go.Born with a terrible facial abnormality, Auggie has been home-schooled by his parents his whole life, in an attempt to protect him from the cruelty of the outside world. Now, for the first time, he's being sent to a real school - and he's dreading it. All he wants is to be accepted - but can he convince his new classmates that he's just like them, underneath it all?Narrated by Auggie and the people around him whose lives he touches forever, Wonder is a funny, frank, astonishingly moving debut to read in one sitting, pass on to others, and remember long after the final page.

-    I started this not knowing anything about it, and it blew me away! I'm so grateful and glad that I read this.

-    Everyone should read this book! There is something for everyone! Young and older readers will love this.

-    The morals in this story are timeless and for everyone. This is a very feel-good book.

-    I love how short the chapters were. They were like journal entries, but not. It was very effective for this story.

-    I LOVED the Julian chapters at the end. Everyone makes mistakes, and it was great seeing Julian's side of the story. His parents were horrible people! But his grandma and her story were amazing!

-    I liked the different perspectives, especially from Auggie's sister and friends. It was neat and interesting to read from outside perspectives as well as Auggie's.