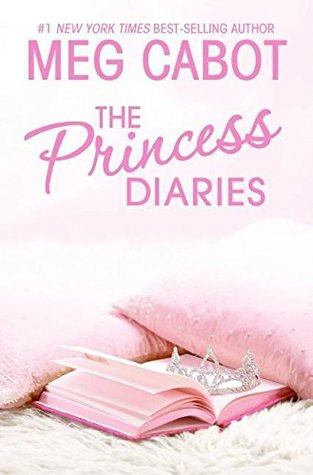 Goodreads Says:    She's just a New York City girl living with her artist mom...
News Flash: Dad is prince of Genovia. (So that's why a limo meets her at the airport!)Downer: Dad can't have any more kids. (So no heir to the throne.)Shock of the Century: Like it or not, Mia Thermopolis is prime princess material.Mia must take princess lessons from her dreaded grandmére, the dowager princess of Genovia, who thinks Mia has a thing or two to learn before she steps up to the throne.Well, her father can lecture her until he's royal-blue in the face about her princessly duty--no way is she moving to Genovia and leaving Manhattan behind. But what's a girl to do when her name is Princess Amelia Mignonette Grimaldi Thermopolis Renaldo?

-    I read this series before I started blogging, and apparently I wrote a review on Goodreads after finishing this book. Here is what I wrote:

I have to admit that the Princess Diaries series is my guilty pleasure. I usually despise stuff like this, but something about the books makes me want to keep reading.

The characters MAKE this book. Mia is a comical teenager with a lot of teenager worries and problems, plus the added stress of being a princess. I think Mia is a very lovable character, and I think a lot of girls can relate her in some way. I liked seeing her develop some backbone in the book, and how she became more assertive. I also like all the sub-characters. Lily can sometimes get on my nerves, but she is a good friend.
Even though this is written in a diary form, I don't think it takes away from the story at all. I actually really enjoy Meg Cabot's style. It's fun and easy to read.
There are a few things that I don't think are appropriate for the target age group, but overall it's a fun book.

-    I've wanted to re-read the series cause I remember liking them a lot, but now I wonder why I liked it so much. It isn't that great.

-    Mia is a spaz! She freaks out over everything, and it's like it is the end of the world. I just want to yell "CHILL OUT!" at her.

-    Tina is probably my favorite out of Mia's friends. She seems a lot nicer.

-    I still think there is inappropriate material for the target audience. I don't see teens really reading this. I think twelve year old girls are more the target cause Mia is only 14. I wish Mia was at least 16 and a little more mature.

-    There are a lot of deity swears, but nothing else major as far as language.

-    This is first time I've felt this way about a YA book, but I think this is just too young for me. I found it pretty immature and silly.

-    Despite all the complaints, there were still some fun moments in the book and I'm going to continue the series.
Posted by Kami at 7:00 AM