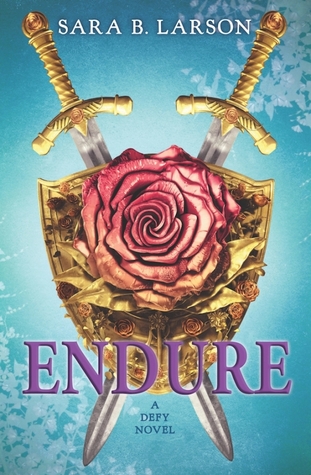 Goodreads Says:    At last, Alexa and King Damian are engaged to be married. But their lives are far from safe. The kingdom of Antion is under siege, and Rylan is a prisoner of the enemy. Even worse, Alexa remains at the mercy of the evil Dansiian Rafe, who controls her mind and can force Alexa to kill or harm Damian at any moment. Despite this, Alexa is determined to rescue Rylan, which soon leads her far from Damian and deep into enemy territory.
When she arrives, what awaits her is deadlier than anything she could have ever imagined: an army of black sorcerers and a horrifying plot to destroy the world as Alexa knows it. Will she be able to gather the strength to free herself, protect the love of her life, and save the land? Will there ever be true peace?Acclaimed author Sara B. Larson has woven a stunning, romantic, and evocative finale to the Defy trilogy that is sure to leave readers breathless until the very last page.

-    This was a good conclusion to the series. I was happy with how everything wrapped up.

-    I really wanted Damian to take a bigger role in this book. I wanted to see his amazing fighting and magic skills, but there wasn't much of it. I was disappointed. I think it would have been cool to see Alexa and Damian go on an adventure together. They are equally matched, and I wanted to see more of that.

-    Damian and Alexa's relationship still bugs a bit. Damian pretty much became Four in the beginning of the book.

-    I liked all the action and I thought the story telling was well done.

-    I really wish Rylan had been replaced with Marcel. I don't like the love triangle, but it would have been awesome if Alexa had been trying to save her beloved brother. I could have gotten behind that.

-    Spoiler! People die. For a little bit I was thinking the author was killing people off just to kill people, but I'm actually okay with the deaths. I feel like the character's deaths weren't wasted, and it made the book more realistic.

-    I like how the author portrayed war as something horrible for both sides. She didn't sugar coat anything, and I appreciate that.

-    I would consider this more of a fluff fantasy trilogy, but I enjoyed it.