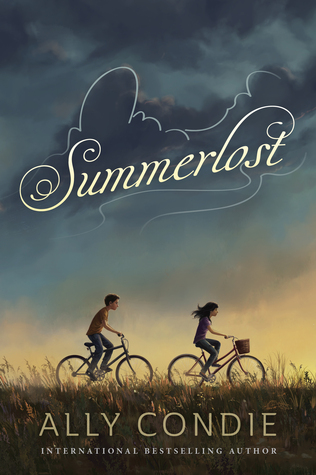 Goodreads Says:    It's the first real summer since the devastating accident that killed Cedar's father and younger brother, Ben. But now Cedar and what’s left of her family are returning to the town of Iron Creek for the summer. They’re just settling into their new house when a boy named Leo, dressed in costume, rides by on his bike. Intrigued, Cedar follows him to the renowned Summerlost theatre festival. Soon, she not only has a new friend in Leo and a job working concessions at the festival, she finds herself surrounded by mystery. The mystery of the tragic, too-short life of the Hollywood actress who haunts the halls of Summerlost. And the mystery of the strange gifts that keep appearing for Cedar.
Infused with emotion and rich with understanding, Summerlost is the touching middle grade debut from Ally Condie, the international bestselling author of the Matched series, that highlights the strength of family and personal resilience in the face of tragedy.

-    Ally has such a way with words. While this book wasn't as poetic as her other works, it was still beautiful and flowed like only Ally Condie can write.

-    I really like that this is a tribute to The Shakespeare Festival in Cedar City. I have never been to the festival, but this makes me really want to go. I thought it was canny that the main character's name was Cedar. Ha!

-    The story is a very sweet one filled with friendship, a little mystery, and a tad of sadness. I felt a lot of emotions for Cedar. I wanted to give her hug.

-    I really liked Leo, and I liked that Cedar and Leo were just friends. You can have a great story with kids just being kids and a boy and a girl just being friends! THANK YOU!

-    Even though this is a middle grade book, I think adults will really like it too.