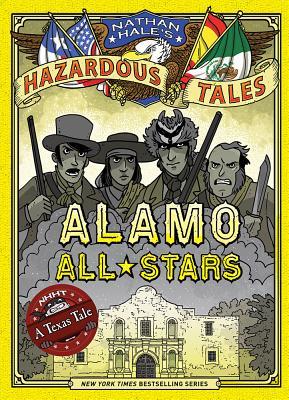 Goodreads Says:    From Nathan Hale, #1 New York Times bestselling author and Texas Bluebonnet Award Master List maker, comes the definitive graphic novel about the Alamo.
Hale relays the facts, politics, military actions, and prominent personalities that defined the Texas Revolution in factual yet humorous scenes that will capture the attention of reluctant readers and fans of history alike. In the early 1800s, Texas was a wild and dangerous land fought over by the Mexican government, Native Americans, and settlers from the United States. Beginning with the expeditions of the so-called “Land Pirates,” through the doomed stand at the Alamo, and ending with the victory over Santa Anna at the Battle of San Jacinto, the entire Texas saga is on display. Leading the charge to settle this new frontier is Stephen F. Austin, with a cast of dangerous and colorful characters, including Jim Bowie, William Travis, David Crockett, and others. Through his vivid depiction and additional maps, and biographies located in the back of the book, Nathan Hale brings new insight for students, teachers, and historians into one of the most iconic structures in the United States.

-    This isn't my favorite of the series, but I still enjoyed it.

-    Nathan changed the formula a little bit. Other characters helped Nathan Hale tell the story, and the hangman wasn't the only one interrupting with comments and questions. I didn't really care for the new narrators. They weren't needed.

-    I don't know a lot of back story for the Alamo, so it was good to learn about that and guys I'd never heard of, but on the other hand, I was a little confused in the beginning. The intro threw the reader in the middle of something and it took me a while to catch up.

-    The cholera monster was awesome! It was very creative and scary looking.

-    The page where you have to turn the book sideways and follow paths to find out what happens to several guys is confusing. I didn't like it.

-    I enjoy the humor of these books. It helps these historical stories to be light and fun for kids.

-    Overall, this was fun, and I'll continue to read these Hazardous Tales.
Posted by Kami at 7:00 AM