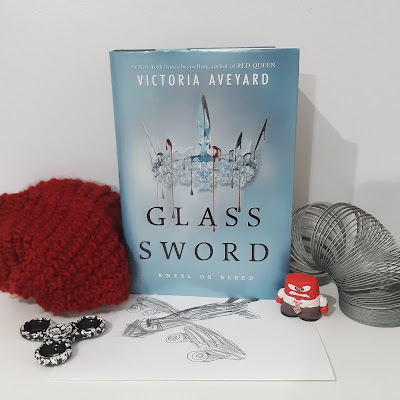 Goodreads Synopsis:    If there’s one thing Mare Barrow knows, it’s that she’s different.Mare Barrow’s blood is red—the color of common folk—but her Silver ability, the power to control lightning, has turned her into a weapon that the royal court tries to control. The crown calls her an impossibility, a fake, but as she makes her escape from Maven, the prince—the friend—who betrayed her, Mare uncovers something startling: she is not the only one of her kind.Pursued by Maven, now a vindictive king, Mare sets out to find and recruit other Red-and-Silver fighters to join in the struggle against her oppressors. But Mare finds herself on a deadly path, at risk of becoming exactly the kind of monster she is trying to defeat. Will she shatter under the weight of the lives that are the cost of rebellion? Or have treachery and betrayal hardened her forever?The electrifying next installment in the Red Queen series escalates the struggle between the growing rebel army and the blood-segregated world they’ve always known—and pits Mare against the darkness that has grown in her soul.

-    I thought the momentum from the first book would carry on throughout the second book, especially with how things ended in Red Queen. Sadly, this one moved slower. The urgency and thrill wasn't there.

-    Most of the book is about Mare searching for more new bloods like her. It was interesting, but there wasn't a lot to move the story along.

-    Mare was a jerk for most of the story. I didn't like the way she treated Cal, Kilorn, her family, and everyone else. There wasn't a lot of character growth from anyone.

-    The repetition got really annoying. Mare's monologues in her head were long winded, and sometimes I just wanted to smack her! You are the lighting girl! I get it! You don't have to say it ALL the time!

-    Despite my complaints, I'm still enjoying the story a lot. There were still a lot of great scenes, and I'm excited to continue the series.
Posted by Kami at 2:00 PM