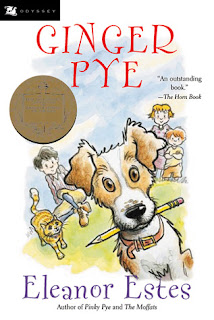 Title:  Ginger Pye
Author:  Eleanor Estes
Illustrator:  Edward Ardizzone
Series:  The Pyes #1
Publisher:  HMH Books for Young Readers
Date Published:  1951
Genre:  Middle Grade, Contemporary
Rating:  ⭐
My Thoughts:
-    Okay, so the Pye boy really wants one of the new puppies from a neighbor's house. He even has his puppy picked out and everything. He has to raise a dollar to buy the puppy, and he finds out another boy wants to buy his particular puppy as well. After doing a chore for a friend, he gets his dog. The family loves the dog, but a mysterious person with a yellow hat keeps spying on them and the dog. Sadly, the puppy gets stolen, and they spend a ridiculous amount of time trying to find out who took the dog.
-    Gnome and I were incredibly frustrated and bored with the story and the characters. It was so blatantly obvious who took the dog, but the kids were so wrapped up in some "unsavory" character that they made up that they couldn't figure it out. Gnome and I frequently looked at each other and commented on the stupidity of the characters, even the adults.
-    You know that type of old person that likes to go off on random unimportant tangents while telling a story, and the story becomes this long, winding, boring, and kinda useless story? That was this book! The random tangents were SO obnoxious and pointless.
-    This makes Newbery Award book number 31 for me. I hope and pray that the next book is better.
Trigger Warning:  Animal Abuse
Posted by Kami at 8:20 AM