Lies, Love, and Breakfast at Tiffany's 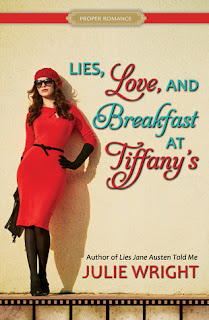 Title:  Lies, Love, and Breakfast at Tiffany's
Author:  Julie Wright
Series:  Proper Romance
Publisher:  Shadow Mountain
Date Published:  November 6, 2018
Genre:  Romance, Adult Fiction, Contemporary
Rating:  ⭐⭐
My Thoughts:
-    I told myself I wasn't going to read any more of the proper romance books, but then they released one that is highly influenced by Audrey Hepburn. *sigh*
-    Silvia is an up and coming film editor in Hollywood. She is determined to make Hollywood a more female friendly and equality friendly place to work, which would be easier if her boss wasn't a slacker and a jerk. Silvia's old boss, Ben, saves her and her job one night, and Silvia decides to notice how appealing her ex-boss/kinda friend is. Silvia's life has been mildly influenced by Audrey Hepburn and her movies. Her glass eye is even named Audrey.
-    I loved the quotes at the beginning of the chapters. I knew them all!
-    Silvia's relationship with Audrey Hepburn was a little weird for me. She wasn't really a fan, she was just a look alike with cancer in common. Silvia's grandma was the true Audrey Hepburn fan, who appreciated Hepburn and her work for it's amazingness.
-    Speaking of the grandma, I wish the book had more about her. Grandma was the most interesting part of the story. She was my favorite character, and her story interested me way more than Silvia's.
-    Besides the Audrey Hepburn parts and the grandma parts, I was bored. The romance and the story just weren't doing it for me.
My Thoughts in a GIF: