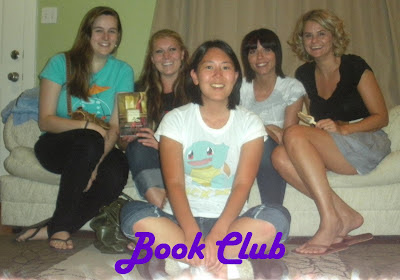 For June, we read

SPOILER ALERT!  DON'T CONTINUE READING UNLESS YOU'VE READ THE BOOK OR DON'T CARE IF YOU KNOW WHAT HAPPENS!  YOU HAVE BEEN WARNED!

The snackage I provided was Butterfly's Dust and Criollo
(aka Pina Colada and Cakebites).  Convincing huh?
I thought it was clever :)

We had a grand ol' time, and covered many topics of conversation, including:  Hugh Grant, Les Miserables, Chick Flicks, Child Birth, Circumcisions, Strippers, Miscarriages, Brave, food, and much more.  Yes, we did talk about the book too.

Things we discussed from the Poison Study:

The whole commander is a female and a male was a bit confusing.  We decided that he was born a woman, but was a man trapped in a woman's body, and some magic was involved in changing him.

Erin and Emma thought Yelena was going to end up with Ari cause they had some banter and closeness between them.  Later they could accept Valek as the love interest.  The rest of us are swooning over Valek.

Rand's character was questionable.  We talked about how we didn't trust him or want to like him, but he did some likeable things.  Everyone knew there was something off about him from the get go.  He had some weird mood swings.

We felt like some of the sexual abuse wasn't really needed.  We could understand that Yelena was raped and she killed Reyad, but some of the other stuff was cringe worthy (like the naked gymnastics).

Everyone didn't really want to prolong the next 2 books cause we all just want to DEVOUR them, so we decided to read Magic Study and Fire Study for next month.
Posted by Kami at 8:00 AM