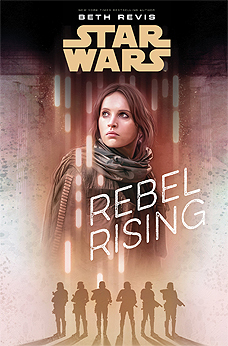 Goodreads Synopsis:    When Jyn Erso was five years old, her mother was murdered and her father taken from her to serve the Empire. But despite the loss of her parents she is not completely alone—Saw Gerrera, a man willing to go to any extremes necessary in order to resist Imperial tyranny, takes her in as his own, and gives her not only a home but all the abilities and resources she needs to become a rebel herself.
Jyn dedicates herself to the cause—and the man. But fighting alongside Saw and his people brings with it danger and the question of just how far Jyn is willing to go as one of Saw’s soldiers. When she faces an unthinkable betrayal that shatters her world, Jyn will have to pull the pieces of herself back together and figure out what she truly believes in…and who she can really trust.

-    I really like Rogue One, and the characters are so intriguing to me. I want to know more about all of them.

-    I loved learning more about Jyn. Since I read Catalyst, I know her whole life story now. I can't say that for any other Star Wars character.

-    I liked getting to know Saw better. I liked his relationship with Jyn, and it is sad that his ambitions were greater than his love for her.

-    I liked seeing Jyn learn how to fight, learn how to take care of herself, and become who she is in Rogue One.

-    I liked how there were chapters of her time in prison mixed in with the story.

-    I kinda want to read the Rogue One novelization now. I wonder if it adds anything to movie.
Posted by Kami at 7:55 AM