The Trumpeter of Krakow 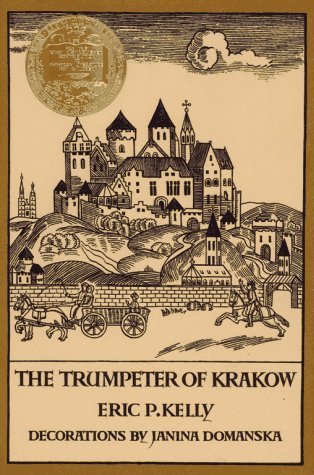 From Goodreads:    Set in 15th century Poland, The Trumpeter of Krakow is the story of a young boy’s admiration for the bravery of a long-dead youth and how this encourages him to remain loyal to his country, in the face of great danger.
Forced to abandon their farm to the invading Tartars, Joseph Charnetski and his parents flee to Krakow with the only thing that they managed to salvage—a priceless family heirloom called the Great Tarnov Crystal. Reputed to have strange magical powers that will guarantee victory to anyone who possesses it, the Crystal must be delivered to the king before it falls into the wrong hands. Only the inspiring example of the young trumpeter to Krakow, who met his death when he alerted the city to an invasion by the Tartars, gives Joseph the courage he needs to complete his mission.

-    Reading books written in the 20s has given me a whole new appreciation for modern editing and writing.

-    Most of the story is okay, but my mind kept wandering away from the story. Sometimes I would go back and reread what I missed, but most of the time I moved on and just tried to figure out what was happening.

-    I feel like this could have been a really fun story if the writing was a little different.