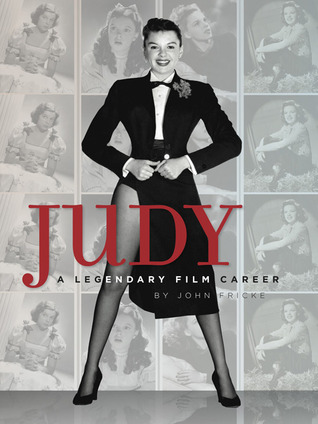 From Goodreads:    Through her incomparable work on screen, stage, record, radio, and television, Judy Garland earned renown as “The World’s Greatest Entertainer.” It was as a motion picture star though, that she first rose to international fame. From her feature film debut in 1936 through the aptly titled I Could Go on Singing in 1963, she lit up the screen with a magic uniquely hers—and dazzled world-wide audiences of all ages.
Judy Garland starred in two dozen of the all-time classic movie musicals, among them A Star is Born, Meet Me in St. Louis, Babes in Arms, Easter Parade, For Me and My Gal, and The Harvey Girls. Her dramatic turns in Judgment at Nuremberg, The Clock, and A Child is Waiting won added acclaim. And perhaps most unforgettably, she starred as Dorothy Gale in the best-loved motion picture of all time: The Wizard of Oz. Judy: A Legendary Film Career tells the story of Garland’s movie work in unprecedented detail. Hundreds of never-before-published photos, newly-assembled contemporary reviews, insight from her costars and coworkers, and production histories are provided for each film in which she appeared. Highlighting and complimenting the feature films is a definitive biography; an examination of Judy’s short subjects; details of the movies she did not complete; and an enthralling compendium of film projects for which she was considered or rumored. The text is illustrated by more than five hundred photos, encompassing poster art; costume tests; behind-the-scenes candids; onstage and backstage glimpses of her theatrical successes; and personal snapshots. Judy is the exhaustively researched work of historian John Fricke. He celebrates as never before the heart, humor, and incandescent motion picture achievement of the one-and-only Judy Garland.

-    I'm a big Judy Garland fan, and I really enjoyed this book.

-    I love that this book was a biography on Judy's life and her career. It covered both equally.

-    I feel bad for all the struggles Judy had in her life. I really believe that MGM should have been held accountable to what they did to her as a girl. I wish Judy could have gotten the help and rest that she needed. I'm glad that she had a lot of good things in her life as well.

-    I liked the way this book was formatted. I loved going through every single movie and getting all the quotes and everything.

-    Judy was SO talented. Singing, dancing, and acting came so natural to her, and I think she was one of the greatest entertainers in all of history. When she is on the screen, I can't help watching.
Posted by Kami at 8:27 AM