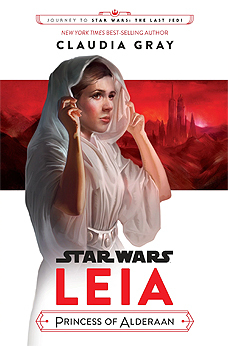 Goodreads Synopsis:    A LONG TIME AGO IN A GALAXY FAR, FAR AWAY....THERE WAS A PRINCESS WHO BECAME A LEGEND.
Sixteen-year-old Princess Leia Organa faces the most challenging task of her life so far: proving herself in the areas of body, mind, and heart to be formally named heir to the thrown of Alderaan. She's taking rigorous survival courses, practicing politics, and spearheading relief missions to worlds under Imperial control. But Leia has worries beyond her claim to the crown. Her parents, Breha and Bail, aren't acting like themselves lately; they are distant and preoccupied, seemingly more concerned with throwing dinner parties for their allies in the Senate than they are with their own daughter. Determined to uncover her parents' secrets, Leia starts down an increasingly dangerous path that puts her right under the watchful eye of the Empire. And when Leia discovers what her parents and their allies are planning behind closed doors, she finds herself facing what seems like an impossible choice; dedicate herself to the people of Alderaan--including the make she loves--or the galaxy at large, which is in desperate need of a rebel hero.

-    I didn't feel like the author captured Leia's character. When you write an iconic character like Leia, you need to nail her personality.

-    The story was really slow. Leia was supposed to be proving herself worthy to be princess, but she spent a lot of time hiking with friends.

-    I didn't like that Leia's parents were keeping the rebellion a secret from her. She is perfectly capable of handling the truth. I was so bugged, and I didn't feel like it was in Bail's character to hide that from Leia.

-    I wish the story had covered more of the early days of the rebellion and Leia's role in that.
Posted by Kami at 7:00 AM