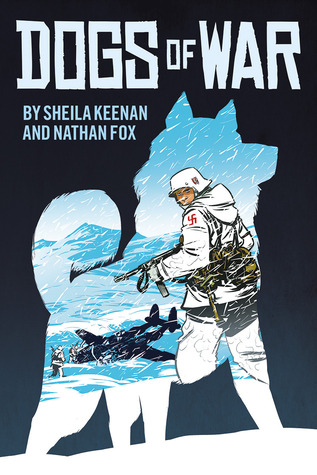 Goodreads Synopsis:    Sheila Keenan's captivating stories, paired with Nathan Fox's stunning art, bring the heroic military actions of man's best friend to life!
Some war heroes heard the wind whistling over a hidden trip wire.Some war heroes sniffed out a sniper 1,000 yards away.Some war heroes stood tall . . . on four legs!DOGS OF WAR is a graphic novel that tells the stories of the canine military heroes of World War I, World War II, and the Vietnam War. This collection of three fictional stories was inspired by historic battles and real military practice. Each story tells the remarkable adventures of a soldier and his service dog and is rendered with fascinating and beautiful detail, bringing to life the faithful dogs who braved bombs, barrages, and battles to save the lives of countless soldiers.Based on the real-life roles of military dogs that served as Red Cross rescuers, messengers, scouts, search-and-rescue teams, sentries, and mascots, DOGS OF WAR captures both the adventure and the devastation brought on by war, as well as the celebrations of life and friendship between boys and their dogs.

-    I really enjoyed these stories. They were heart-warming and eye-opening. There should be more non-fiction graphic novels.

-    I loved the three stories, and I like that they covered three different wars.

-    I didn't realize animals played such big roles in war and military. It makes sense that you would use them.

-    The artwork was great. The struggles of war were portrayed without being too graphic.

-    I loved the relationships between the soldiers and the dogs. It was very touching.