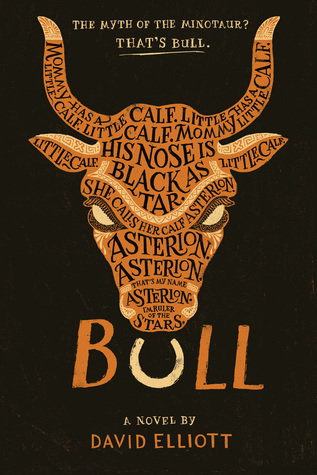 From Goodreads:    SEE THE STORY OF THESEUS AND THE MINOTAUR IN A WHOLE NEW LIGHT
Minos thought he couldPull a fast oneOn me,Poseidon!God of the Sea!But I’m the last oneOn whom youShould try such a thing.The nerve of that guy.The balls. The audacity.I AM THE OCEAN!I got capacity!Depths! Darkness! Delphic power!So his sweet little planWent big-time sourAnd his wife had a sonBorn with horns and a muzzleWho ended upIn an underground puzzle.What is it with you mortals?You just can’t seem to learn:If you play with fire, babies,You’re gonna get burned.Much like Lin-Manuel Miranda did in Hamilton, the New York Times best-selling author David Elliott turns a classic on its head in form and approach, updating the timeless story of Theseus and the Minotaur for a new generation. A rough, rowdy, and darkly comedic young adult retelling in verse, Bull will have readers reevaluating one of mythology's most infamous monsters.

-    This was the classic tale of Theseus and the Minotaur, but it was SO hilarious! I laughed out loud several times.

-    The characters, especially Poseidon, speak a little more modernly than you would expect, which just adds to the humor.

-    Poseidon was my favorite! He is hilarious in this book!

-    I really liked how the words turned into art.