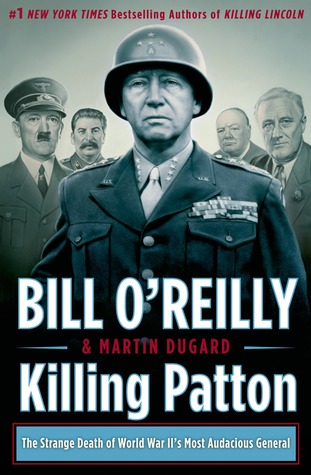 Goodreads Says:    General George S. Patton, Jr. died under mysterious circumstances in the months following the end of World War II. For almost seventy years, there has been suspicion that his death was not an accident—and may very well have been an act of assassination. Killing Patton takes readers inside the final year of the war and recounts the events surrounding Patton’s tragic demise, naming names of the many powerful individuals who wanted him silenced.

-    I love these books. I learn so much and they are fun to read. History should always be written this way.

-    I didn't understand all of the military stuff. I'm not military savy, but I don't feel like it took anything away from the overall story.

-    I liked the insights into Hitler's life, politics, etc. I didn't a lot of things about Hitler, especially his poor health.

-    I also liked the chapters about FDR. I learned a few things about our past president.

-    I knew Stalin and the Russians were bad news during WWII, but dang! Things were more horrific than I knew. To me, Stalin was worse than Hitler. I agree with Patton that it would have been just as bad for the Russians to take over as it would if the Nazis had won.

-    Thompson should have been punished! How did he get away with what he did? He was breaking all kinds of rules, AND he killed one of our most valued generals. What the heck!?

-    I'm not a big nonfiction reader, but I really enjoyed this.

Companion Books:
(covers are linked to my thoughts)