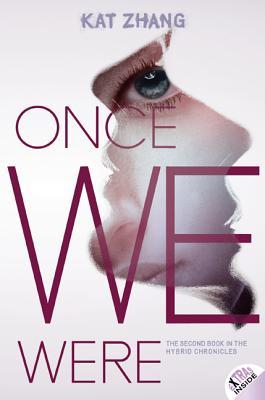 From Goodreads:    In this riveting sequel to What's Left of Me, Eva and Addie struggle to share their body as they clash over romance and join the fight for hybrid freedom. With a powerful voice, an intense sibling relationship, and a sweet romance against the odds, this second novel in the Hybrid Chronicles is perfect for fans of Ally Condie, Lauren Oliver, and Scott Westerfeld.
Addie and Eva escaped imprisonment at a horrific psychiatric hospital. Now they should be safe, living among an underground hybrid movement. But safety is starting to feel constricting. Faced with the possibility of being in hiding forever, the girls are eager to help bring about change--now. The answer seems to lie within a splinter group willing to go to extremes for hybrid freedom, but as Addie and Eva fall ever deeper into their plans, what they thought was the solution to their problems just might be the thing that destroys everything--including their bond to each other.

-   This book had a little bit of 2nd book syndrome. Not a lot happened, but there was some development in the characters.

-    I liked meeting new characters, and I liked how they interacted with the characters I already knew. I liked that Addie had people to talk to and get to know.

-    Addie and Eva are way nicer about sharing their body that I would be. They only argue about it once I think. I don't think I could handle sharing a body like they do.

-    I wish Hally and Liva did more. They are the same age as Addie and Eva, but I felt like everyone thought they were too young or incapable of doing anything. It bugged!

-    The ending was exciting, and I thought it wrapped up nicely. There are still unanswered questions, but I like how the book ended.

Previous book in The Hybrid Chronicles
(cover is linked)

Email ThisBlogThis!Share to TwitterShare to FacebookShare to Pinterest
Labels: 2014, Harper Collins, Kat Zhang, Once We Were, The Hybrid Chronicles