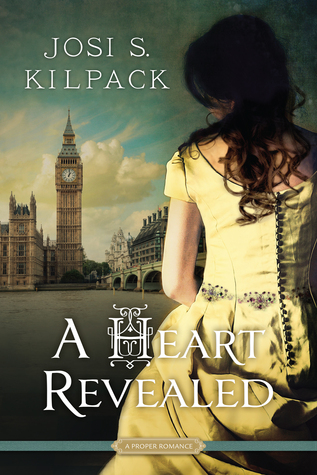 From Goodreads:    Amber Marie Sterlington, the Rage of the Season in Regency-era London, has her pick of men, and she knows what she wants most in a husband: a title and a fortune. Why would she ever marry for something as fickle as love? And why would she ever look twice at Thomas Richards, a third son of a country lord?
But when Amber’s social standing is threatened, the character of her future husband becomes far more important than his position. After a public humiliation, she finds herself exiled to Yorkshire. Alone except for her maid, Amber is faced with a future she never expected in a circumstance far below what she has known all her life. Humbled and lonely, Amber begins to wonder if isolation is for the best. Who could ever love her now?

-    I enjoyed this story, not as much as other Proper Romances, but I still liked it.

-    I liked that Amber had a very unique predicament, especially for a regency setting. It makes this book stand out.

-    The beginning is very engaging, but the middle was a little slow. It was the same days over and over again. I couldn't read the ending fast enough though.

-    This book felt like a Johnny Lingo retelling. The moral of the story was shoved in my face a little too much. It wasn't horrible, but Thomas's spiel at the end got a little tedious.

-    I really liked Amber's character development. She was such a snob at the beginning, and I love how she learns to become self sufficient, and how she learns about what really matters in life.
Posted by Kami at 10:33 AM