Alien in My Pocket: Blast Off! 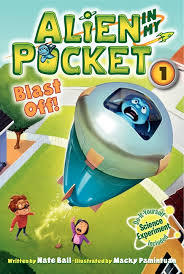 From Goodreads:    The adventure begins in this exciting new chapter book series!
When a four-inch-tall alien crash-lands through Zack McGee's bedroom window, Zack is sure he's about to become the first victim in a new War of the Worlds. But when the alien turns out to have weapons that are more ticklish than terrifying, Zack realizes that rather than protect the world from the alien, it's up to him to protect the alien in his pocket from the world.

-    I read this with Gnome, and I think we were both meh about it.

-    There were a lot of silly moments, but we rarely laughed.

-    I thought the best part of the book was Amp's mind control powers. I wish there had been more of that.

-    The ending left me feeling like the whole story was a waste of time. The characters spent all this time trying to accomplish their goal, and for what!? Nothing!

-    I didn't really love any of the characters, they were tolerable at best.
Posted by Kami at 7:00 AM

Email ThisBlogThis!Share to TwitterShare to FacebookShare to Pinterest
Labels: 2014, Alien in My Pocket, Blast Off, Chapter Books, Nate Ball