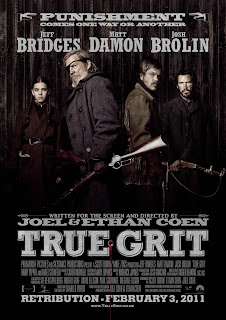 -    I was disappointed. This movie was dumb!

-    Whoever edited this movie needs to be fired! The scene jumps were awful! It made the movie feel choppy, and the story didn't flow too smoothly. If I hadn't seen the original first, I would not have known what was going on and what the story was.

-    I could not understand most of what Jeff Bridges was saying! He mumbled a lot, and I can't understand hick talk anyway, so the mumbling made it worse.

-    Does Rooster ever stop talking? He never shut up! He just rambled on and on and on, and I feel like it didn't fit his character.

-    After the Texas ranger bit off his tongue, I couldn't understand him either! It was frustrating.

-    What is with the rope? How does it keep snakes away? They should have explained that.

-    This one just wasn't as good as the old original.

-    I liked the Mattie in this one. She wasn't as annoying as the original. She did a good job, and I can't believe this was her first movie!