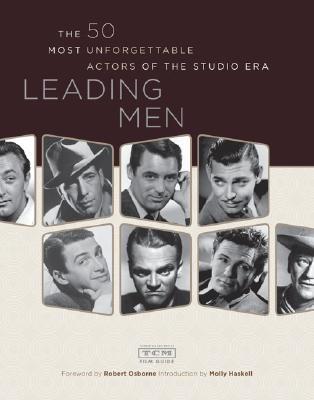 Goodreads Description:    Tough, sophisticated, witty, and handsome from Rudolph Valentino to Buster Keaton, Cary Grant to Jimmy Stewart, Humphrey Bogart to Steve McQueen, each of the actors featured in this book brought a magnetic presence to the screen and made a powerful and enduring mark on film history. Produced by Turner Classic Movies, this stylish and definitive guide as the inside scoop and off-the-record reveals of fifty unforgettable actors and is also the focus of an on-air film festival on the channel. The lives and accomplishments of each actor are celebrated in an insightful career overview, accompanied by an annotated list of essential films, filmographies, behind the scenes facts, Academy Award wins and nominations. Full of surprising trivia, film stills, posters, and stunning photos, Leading Men pays tribute to the most charismatic, enduring, and elegant actors of the silver screen and essential resource for movie buffs and pop-culture enthusiasts alike.

-    I love old movies, and I love the old school actors. They had class and charisma that no other era or group of actors will have!

-    My favorite quote in the book: "Their attraction was in what they did and were, not how they looked." LOVE THAT!

-    It was fun to flip through this book and read about some of my favorite actors. I admit, I didn't read about every guy, but I read most of them.

-    After reading, I gained a lot more respect for Cary Grant, James Stuart, and Gregory Peck! They were real gentlemen that did great things!

-    Sadly, my respect also faltered for a few. I won't list names.

-    I did not know Jimmy Stuart was a Brigadeer General in the Air Force!!!! Wholly huge shocker Batman!! I don't know why he wanted to keep it a secret. That title is something to be proud of!

-    One of the best parts of the book was looking at all the pictures! So fun! The one of Charlie Chaplin is crazy! I totally didn't recognize him!

-    There is not enough time in the day...or life, to watch all the movies I want to watch! The movies listed in the book just killed me! I wanted to watch all of them at that moment I read about it.

-    A couple of my favs is Spencer Tracy, Gene Kelly, Mickey Rooney, and the others I've mentioned above.

-    I'm hoping my hubby looks like Spencer Tracy when he is older...I think he will :)