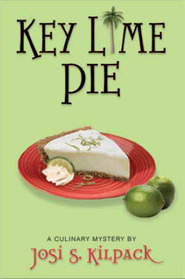 From Goodreads:    When Sadie Hoffmiller's new friend, Eric Burton, receives word that his missing daughter's body may have been found in Florida, he immediately packs his bags. Sadie is determined to stay home and prove to everyone that she is not a busybody. But when she senses Eric is hiding something, Sadie is compelled to take action. Before she knows it, she's in the heart of Miami, trying to piece together a trail that might just give Eric the answers he's so desperately searching for. In the process, Sadie finds herself in the company of some colorful characters and some good ol' southern cooking. But despite the drama and intrigue, all Sadie really wants is to go home ... as soon as she does just one more thing.
Includes eight new mouthwatering recipes, tested and approved by the official bakers of Sadie's Test Kitchen.

-    FINALLY!! Something other than a murder mystery! Well...there is still some murder involved, but the main mystery isn't a murder!

-    The beginning was a tad slow. It doesn't really pick up until about 3/4 of the way through, and then the fun really begins!

-    Every time I fee like I'm not going to continue with these books, the story pulls me in, and I want to read another.

-    I'm starting to get the rhythm and feel for these books, so the ending wasn't a shocker, and I kinda predicted most of what happened. There better be some surprising things in the future for Sadie.

-    My favorite character in this book was Monty. What a guy!

-    I thought Eric was a jerk and a loser in this book! I didn't like that. I wanted to continue loving him, but Pete stole the stage. Pete was a jerk in the last book though, so now I'm just confused!

-    Why are these considered LDS books? The author is LDS, but so are other authors from Utah that aren't considered LDS authors. There is almost no religion in these. I would just consider them mysteries.

-    I like it when Sadie gets roughed up. Violence is exciting!