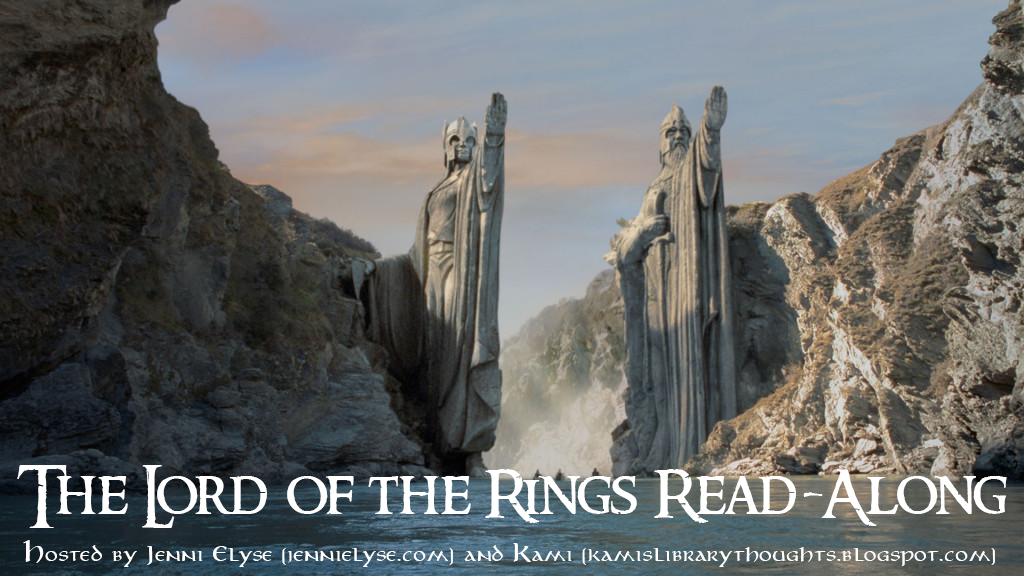 Woo! We only have 1 more book to go!
This has been a fun read along!

Today's discussion post is hosted by Jenni.
Make sure to link your answers over there!

1.    Has your favorite character changed in The Two Towers? If yes, why?

No, Gimli is still awesome! I love the friendship that grew between Gimli and Legolas.

2.    Which do you like more, The Fellowship of the Ring or The Two Towers? Why?

This one is a toughie. I like both for different reasons. I think I enjoyed The Two Towers just a tad more though. It had more action, and that fight between Sam and Shelob was SO epic!

3.   Do you think Frodo and Sam should have killed Gollum?

Yes! I think Bilbo should have killed him!
No! He had a purpose and a part to play in the overall story.

4.    What do you think about Book Faramir vs Movie Faramir?

Movie Faramir is AWFUL!!!! WHY!? Why did they decide to change his character? It is my biggest complaint about the movies. Faramir was the opposite of Boromir, and they should have showed that!! They should have stuck with the book! You can't just change a character's personality!

The actor for Faramir did a good job though. I liked that Faramir and Boromir looked like they could actually be brothers.

I think Frodo should be more wary of Gollum. Sam has the right attitude. I think Frodo can feel a connection with Golllum on some sort of level. They were both bearers of the ring, and I think Frodo is afraid of becoming like Gollum, and he wants to believe someone who had the ring so long isn't completely corrupted.

6.    If you were in Sam's place, would you have made the same choices if you thought Frodo was dead?

I would have taken the ring and tried to finish the quest, but I wouldn't have left Frodo out in the open like that. Shelob could have come back and eaten him. I would have hidden him somewhere.

7.    Frodo is very blessed to have Sam with him on his quest. He is a great support and companion, and Frodo even admits he wouldn't have made if far without Sam. If you could choose one person to take on an epic quest with you, who would it be and why? (Choose anyone! They can be fictional, family, role model, etc.)

I hate narrowing this down to one! There are so many people to choose from! Normally I would say Batman, but for an epic quest like Frodo's I'm going to go with:

He is simply one hell of a butler!

I'd always have good food.

He'd kill everyone in our way with no problem.

If he couldn't help me on this quest, what kind of a butler would he be?


8.    On the flip side, do you think Frodo should have had a different member of the fellowship with him instead of Sam?

Yes and No
I don't think anyone would have followed Frodo with the same determination and diligence as Sam, but Aragorn would have been more useful. Then again, Aragorn had his own role to play. I think things worked out the way they were supposed to.

Like I said before, Sam vs Shelob is EPIC! I loved it! GO SAM!

I don't think the ring is strongly influencing him yet. It is definitely a burden. The book talks about how heavy it is. I think the ring is constantly on Frodo's mind. At this point, I think Frodo is just exhausted. Once the ring wears him out physically, it will be easier to take his mind.

We won't be doing a Twitter Chat, but keep following and using #LotRreadalong for thoughts, quotes, comments, and updates.

We'll be watching the Two Towers on Saturday, July 5 @ 6:00 PM.
We'll be pitching in for pizza, and there will be other refreshments.
Let me or Jenni know you want to come, and we'll get you directions to my place.

We'll be kicking off The Return of the King tomorrow!!
Posted by Kami at 10:41 AM

Email ThisBlogThis!Share to TwitterShare to FacebookShare to Pinterest
Labels: Lord of the Rings Read Along, The Two Towers