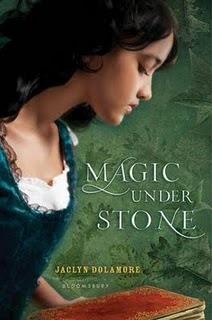 From Goodreads:    For star-crossed lovers Nimira and Erris, there can be no happily ever after until Erris is freed from the clockwork form in which his soul is trapped. And so they go in search of the sorcerer Ordorio Valdana, hoping he will know how to grant Erris real life again. When they learn that Valdana has mysteriously vanished, it's not long before Nimira decides to take matters into her own hands—and begins to study the sorcerer's spell books in secret. Yet even as she begins to understand the power and limitations of sorcery, it becomes clear that freeing Erris will bring danger—if not out-and-out war—as factions within the faerie world are prepared to stop at nothing to prevent him from regaining the throne.

-    This wasn't as good as the first one. I gave it a generous rating on Goodreads.

-    I don't understand why Nim feels so bad for bringing Erris to life. He is in a much better state than before.

-    I feel like Nim is forcing herself to love Erris. It just doesn't seem genuine. I think she likes the idea of loving him.

-    The Jinn was interesting, but he was kind of a wuss.

-    A lot of the book was slow. It didn't really grip me til towards the end.

-    The ending felt rushed and abrupt.

-    I was really disappointed with this book because I really liked the first one.


First book in the Magic Under duology
(cover is linked)