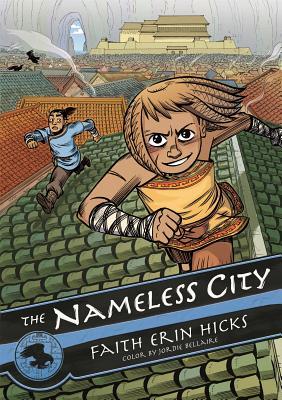 From Goodreads:    Every nation that invades the City gives it a new name. But before long, new invaders arrive and the City changes hands once again. The natives don't let themselves get caught up in the unending wars. To them, their home is the Nameless City, and those who try to name it are forever outsiders.
Kaidu is one such outsider. He's a Dao born and bred--a member of the latest occupying nation. Rat is a native of the Nameless City. At first, she hates Kai for everything he stands for, but his love of his new home may be the one thing that can bring these two unlikely friends together. Let's hope so, because the fate of the Nameless City rests in their hands.

-    The story starts off a little slow, but it picks up, and I really enjoyed it in the end.

-    The characters are really great! They have a bit of mystery to them at first, and as Kaidu and Rat get to know each other, the reader also gets to know these characters. It was really fun.

-    I love that this is a story of two unlikely friends that end up working together to help save the city.

-    The culture is really neat because the city has been conquered so many times, that different cultures have mixed to create an amazing city.

-    The illustrations and environment are great! I really liked the artwork.

-    I thought this was a stand alone, but there is another book coming out. I'm excited to see what happens!
Posted by Kami at 7:00 AM