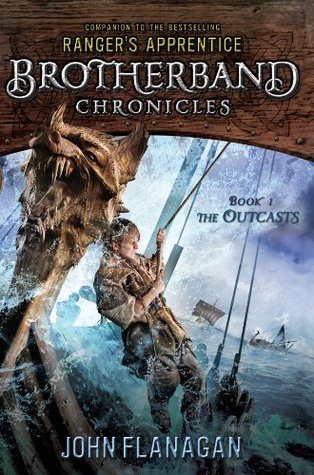 Goodreads Synopsis:    From the author of the global phenomenon Ranger's Apprentice!
They are outcasts. Hal, Stig, and the others - they are the boys the others want no part of. Skandians, as any reader of Ranger's Apprentice could tell you, are known for their size and strength. Not these boys. Yet that doesn't mean they don't have skills. And courage - which they will need every ounce of to do battle at sea against the other bands, the Wolves and the Sharks, in the ultimate race. The icy waters make for a treacherous playing field . . . especially when not everyone thinks of it as playing. John Flanagan, author of the international phenomenon Ranger's Apprentice, creates a new cast of characters to populate his world of Skandians and Araluens, a world millions of young readers around the world have come to know and admire. Full of seafaring adventures and epic battles, Book 1 of The Brotherband Chronicles is sure to thrill readers of Ranger's Apprentice while enticing a whole new generation just now discovering the books.

-    John Flanagan quickly became one of my favorite authors. His books are so much fun, and I'm excited to start another fantastic series.

-    This brilliant story was full of friendship, courage, strategy, seafaring, and ingenuity. I loved every moment.

-    There were a lot of characters, but I enjoyed getting to know each one of them, and I admire each character for their skills and unique personality.

-    There was never a dull or wasted moment in this book. Flanagan's story telling is fantastic.

-    Seriously! What do they have in the water in Australia?!?! Their authors have super story telling powers.
Posted by Kami at 7:00 AM