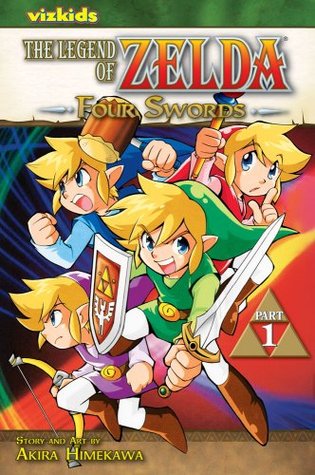 From Goodreads:    Link, now a Hylian Knight, serves Princess Zelda at Hyrule Castle. When Shadow Link kidnaps Princess Zelda, Link once again must prepare himself to defeat the forces of evil. To do so, he needs the legendary Four Sword, but getting it means releasing and then battling the ancient evil power Vaati. The Four Sword also splits Link into four different versions of himself, and these new Links aren't team players! Rescuing Zelda, beating Vaati, and getting his wild alter-egos under control isn't going to be easy!

-    I haven't played Four Swords either, and I don't think I will.

-    Thank goodness the artists gave each Link different eyes, so I could tell the difference between the four Links. They call each other different colors, but the manga is in black and white, so the eyes were the only thing I could really go on.

-    This series is for a younger audience. Gnome really enjoys them, but they are a bit juvenile for me.

-    One Link is plenty! Having four Links was a little annoying.

-    I read this a couple weeks go, and I don't remember much of the story, which is not a good thing. All I remember is the Links arguing.

Previous Books in the Series: