The Legend of Zelda: Oracle of Seasons 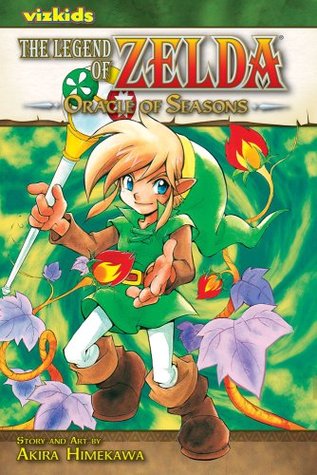 From Goodreads:    In a small village in Hyrule, there lives a boy called Link who has the mark of the Triforce on his left hand. It is a mark of destiny that leads Link on a fantastic adventure! Transported to the land of Holodrum, Link meets Din, the Oracle of Seasons. When a plot to steal the seasons from Holodrum unfolds, Link must battle the evil General Onox to save Holodrum and his friends from a terrible fate!

-    I have never heard of this game. I didn't know it existed, and after reading the manga, I have no desire to play it.

-    The story felt like it came from a bad cartoon adaptation instead of a video game, especially with the weird cast of characters. The artwork looked like a bad american anime.

-    I liked the snarky witch and Ricky the Kangaroo, but it was really different for Link to have these characters as companions, and it was kinda weird.

-    Piyoko was so cute! He was a like a tiny little chocobo.

-    Where was Ganondorf? Isn't he always the bad guy?

-    I liked Zelda a lot. This is probably the cutest Zelda design.

Previous Books in the Series: