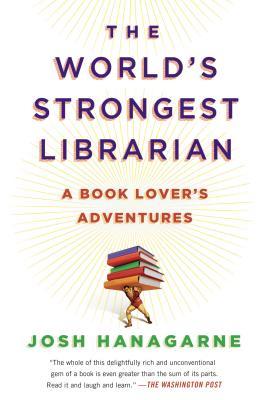 Goodreads Synopsis:    A funny and uplifting story of how a Mormon kid with Tourette’s found salvation in books and weight lifting
Josh Hanagarne couldn’t be invisible if he tried. Although he wouldn't officially be diagnosed with Tourette Syndrome until his freshman year of high school, Josh was six years old when he first began exhibiting symptoms. When he was twenty and had reached his towering height of 6’7”, his tics escalated to nightmarish levels. Determined to conquer his affliction, Josh tried countless remedies, with dismal results. At last, an eccentric, autistic strongman taught Josh how to “throttle” his tics into submission using increasingly elaborate feats of strength. What started as a hobby became an entire way of life—and an effective way of managing his disorder.Today, Josh is a librarian at Salt Lake City’s public library and founder of a popular blog about books and weight lifting—and the proud father of five-year-old Max. Funny and offbeat, The World’s Strongest Librariantraces this unlikely hero as he attempts to overcome his disability, find love, and create a life worth living.

-    The introduction is filled with humor and insight. I was hooked from the get go. It sounds like there is never a dull moment at the Salt Lake City library.

-    The way he describes things is hilarious, visual, and awesome!

-    There were a lot of F-bombs. It surprised me. I thought this was a clean book, but there was a lot of heavy language.

-    I feel a little disappointed with the book. I thought the story was about Josh overcoming Tourette's, but I feel like Tourette's won most of the battles. Josh quit school, jobs, and whatever else because of his condition. It wasn't very uplifting or encouraging in the end.

-    I don't feel like the book really ended. I guess he did well in the Scottish games, but I don't know for sure. I didn't get any closure or peace from the way this book ended.