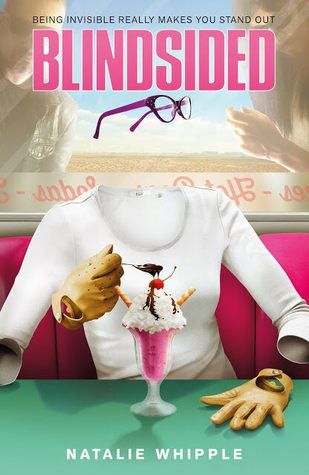 From Goodreads:    Three months after Fiona escapes from her father's syndicate, all seems well in her tiny town of Madison, Arizona. She and Seth are happy together - apart from the teensy fact of Fiona being jealous that Seth can see through her invisibility - and her family and friends are safe. But when the local syndicate and even the Army show up, it's clear there's more going on in town than she could ever imagine. It seems like these huge powers are interested in the old Radiasure factory - could they be reproducing the infamous drug that caused mutations? - and everyone suspects Fiona of knowing more than she should. As Fiona and her friends try to cover their tracks, they discover that they do have some dangerous knowledge. Though at first determined to stop anyone from remaking Radiasure, Fiona learns a secret that could change everything, including her invisibility. Torn between her own desires and the greater good, Fiona might be too blindsided to see the real villain coming.

-    There was a lot of drama between Fiona and Seth. It bugged me. Why couldn't they just talk to each other and hash stuff out?

-    I really liked the addition of Spud. She was awesome! Korean's rock!

-    I could understand Fiona's desire to become visible. It would be hard to not know what you looked like.

-    I didn't understand some things in the end. The military people ended up being good but not? How did everything get resolved from one person going down? I didn't feel like the ending was complete. There were so many people involved and a lot going on, and I wanted a bigger climax.

-    I liked everyone's powers. I wouldn't want to be invisible, but it would be cool to fly. I also liked that some of the abilities aren't as awesome as I thought they would be. There are disadvantages too.

-    I didn't like that Fiona kinda distanced herself from the Pack and her boyfriend. It was frustrating at times. Her friends are so awesome, and she should have asked for their help a lot sooner.

-    While there were some things I didn't enjoy about the story, I'm still attached to these characters, and it was fun to see them again!


First Book
(click on cover to see my thoughts)