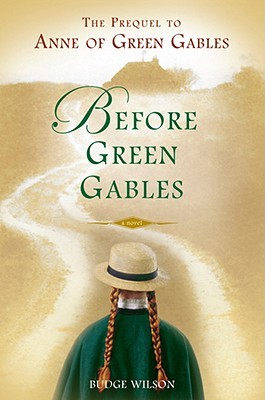 Goodreads Says:    A must-read for generations of book lovers. This remarkable, and heart-warming prequel to the classic Anne of Green Gables was specially authorized by L.M. Montgomery's heirs to celebrate the 100th anniversary of the publication of the original novel.
Before Green Gables is the story of Anne Shirley's life before her arrival at Green Gables-a heartwarming tale of a precocious child whose lively imagination and relentless spirit help her to overcome difficult circumstances and of a young girl's ability to love, learn, and above all, dream.Published in 1908, L. M. Montgomery's coming-of-age classic Anne of Green Gables has enchanted generations of readers, both children and adults. The story of the spunky red-haired orphan from Prince Edward Island is known to millions, and copies of the eight titles in the series have never gone out of print.But when readers first meet Anne, she is eleven, and has just been sent from an orphanage to meet her new family. No one ever learned the events of Anne's life before she arrived at Green Gables.Until now.For the millions of readers who devoured the Green Gables series, Before Green Gables is an irresistible treat; the account of how one of literature's most beloved heroines became the girl who captivated the world.

-    I'm a HUGE Anne fan! We've been friends since I was a little girl. When I discovered this book, I knew I had to read it!

-    The book is very charming, and for the most part, stays true to the Anne series.

-    I wasn't really interested in the beginning. I enjoyed seeing Anne's parents, but they were portrayed as a bit silly. For example, the father made a big deal about Anne's name being spelled with an "e". It was silly. I was eager to get to Anne as a child.

-    The story started picking up when Anne was about 5 years old and she started developing that vivid imagination of hers.

-    I thought the author did a good job at capturing the tone of the Anne books. There were a few things that didn't seem right, but overall the book seems to fit in with the classic Montgomery books.

-    I loved reading about the things in Anne's past that I knew were going to happen, like creating Katie Maurice, the twins, etc.

-    Anne is such a hard worker, and she was SO under appreciated. My only consolation was that I knew how Anne's life would turn out, and I knew she would find Gilbert and be incredibly happy.

-    There were a few times when Anne's life could have taken a different path, and she would have had a better childhood, but then she wouldn't have gone to Green Gables to live with the Cuthberts. I just wanted to shout for Anne to hang in there because there was amazing future ahead of her!

-    I'd definitely recommend this to anyone who loves Anne and her stories.