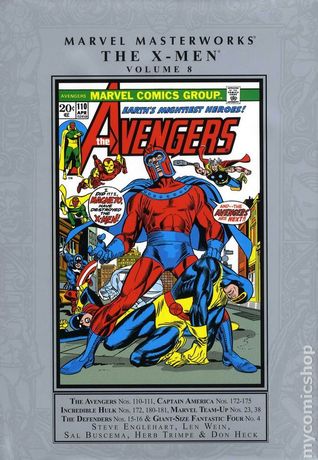 -    Like the previous volume, this was a compilation of other Marvel comics, including Avengers, Hulk, Daredevil, and Fantastic Four.

-    I'm glad The X-Men were kept alive by having appearances in other comics. I can't imagine the Marvel universe without The X-Men.

-    I only got bits and pieces of a larger story, and I really want to read the Avengers and Daredevil now! I need to know what is going on with Black Widow, Hawkeye, and Daredevil.

-    The Hulk issues were bit slower. I'm not as interested in his story, and the military stuff bores me.

-    I was also intrigued with Captain America's story. I want read his older stuff too.

-    Since this was a compilation of other comics, the stories were all disjointed. Sometimes there was an overall story, but most of the time it was an issue from some other story line.

-    I LOVED the Wolverine debut!! I didn't now he debuted in a the Hulk. When he appeared, I was geeking out!

-    The issue with Beast and Spiderman was fun. I miss Beast, and I can't wait til he rejoins The X-Men.

-    I finally collected all the Marvel Masterworks: The X-Men!!!! Wahoo!! I'm so excited to start reading The Uncanny X-Men series. It has been so much fun reading these older comics. This is were these iconic characters started!