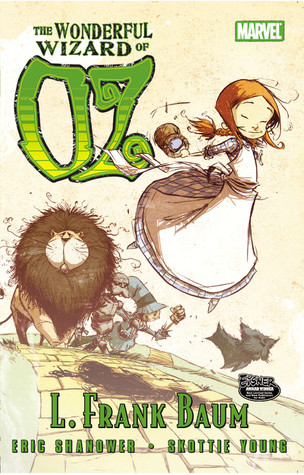 From Goodreads:    The premier American fantasy adventure gets the Merry Marvel treatment! Eisner Award-winning writer/artist Eric Shanower (Age of Bronze) teams up with fan-favorite artist Skottie Young (New X-Men) to bring L. Frank Baum's beloved classic to life! When Kansas farm girl Dorothy flies away to the magical Land of Oz, she fatally flattens a Wicket Witch, liberates a Scarecrow and is hailed by the Munchkin people as a great sorceress...but all she really wants to know is: how does she get home?

COLLECTING:
The Wonderful Wizard of Oz #1-8

-    This was a great adaptation of the book. It has been a while since I read this, but from what I remember the story was very accurate.

-    I loved the illustrations! The style was perfect for the story. I felt like there was a little Tim Burton influence in certain characters and scenery.

-    Reading this made me want to read the book again. It is such a classic tale that just never gets old!

Goodreads Says:    The epic continues! Fresh off their landmark THE WONDERFUL WORLD OF OZ, superstars ERIC SHANOWER (Age of Bronze) and SKOTTIE YOUNG (X-MEN) return with L. Frank Baum's MARVELOUS LAND OF OZ. Join new characters Tip and Jack Pumpkinhead as they're whisked to Oz, and meet foes and friends! You've NEVER seen L. Frank Baum's masterpiece like this before...

COLLECTING: The Marvelous Land of Oz #1-8

-    I have only read the first Oz book, so I wasn't familiar with this story, but I loved it! I want to read all the original Oz books now.

-    Again, the illustrations are perfect and amazing!

-    I loved the introduction of new characters. They were all endearing and wonderful. I was surprised Dorothy didn't make an appearance.

-    The ending is surprising yet predictable. That isn't an easy accomplishment. 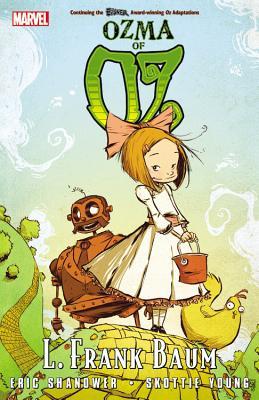 Goodreads Synopsis:    Dorothy is back, and she's not in Kansas anymore. But she's not in Oz, either! L. Frank Baum's magical world comes to life once again as our beloved Dorothy Gale takes yet another unexpected trip to a mystical, faraway land. This time, Dorothy winds up in the land of Ev; she meets new friends such as Tik-Tok the mechanical man and Billina, perhaps the cleverest chicken you'll ever encounter. Dorothy will also have to face the wicked Nome King, who's imprisoned the royal family of Ev. Lucky for her, she'll get help from her Oz friends such as the Tin Woodman and the Scarecrow - along with the new Queen of Oz, the lovely Ozma! But can even their combined might win the day and see Dorothy back home?

-    Hooray! Dorothy is back! Sadly Toto did not return to Oz with her, but she did bring a chicken.

-    The wheelers were creepy looking. Dang!

-    I loved all of Dorothy's new companions, especially Billina. She was hilarious!

-    This is my favorite of the series so far. I loved the ending. 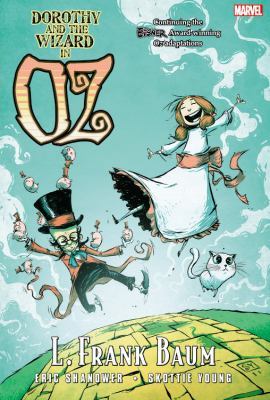 Goodreads Says:    When an earthquake swallows Dorothy, her kitten Eureka and cousin Zeb, and Zeb's horse Jim, they're captured by the Mangaboos! The Wizard of Oz must save them by winning a magic contest - using only his wits and nine tiny piglets. Then: watch out for the savage Invisible Bears, who devour anyone they catch! Dorothy and her friends race across the Invisible Valley, trying to reach the spiral staircase inside Pyramid Mountain. But halfway up the mountain lives the strange Braided Man! Plus: Dorothy meets her old friends - the Scarecrow, Tin Woodman, Cowardly Lion and more! And Eureka is charged with murder for eating one of the Wizard's piglets! The Wizard of Oz has a secret plan to save Eureka, but can it possibly work? Don't miss this thrilling installment in the critically acclaimed Oz adaptations!

COLLECTING: Dorothy & the Wizard in Oz 1-8

-    Dorothy and the wizard are back! No Toto still, but Dorothy brings a cat. Dorothy has a lot of pets. How come the chicken and the cat can talk but Toto doesn't?

-    Frank L. Baum had an extraordinary imagination. Each book is more bizarre than the last. Dorothy and her companions visit some very strange places in this story.

-    Tim Burton should make movies out of all the Oz books. They are right up his alley, and they would be creepy, weird, and awesome!

-    I love how we get to see new characters and old characters in each of these. 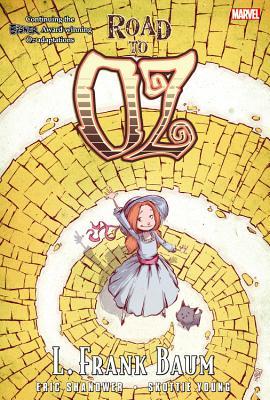 From Goodreads:    Dorothy and Toto are off on another fantastic adventure! When dusty Kansas roads suddenly turn into magic highways, it's a safe bet that one of them is the road to Oz! This time Dorothy's companions are strange - an old homeless guy with a magic magnet, and a mentally-challenged child named Button-Bright, transformed magically by the king of the talking foxes! Who will get an invitation to the most lavish celebration ever known, the birthday party of Ozma of Oz? And how will Dorothy and the Shaggy Man get through the Deadly Desert? Johnny Dooit may have an idea! Eric Shanower and Skottie Young deliver another Oz adaptation that's an instant classic!
COLLECTING: Road To Oz 1-6

-    I felt like this story moved at a much faster pace than the previous books.

-    The Oz books are so visually imaginative. I wonder how everything is described in the original books. I need to read them.

-    Why was Button Bright even in the story? He didn't do anything! He was useless character.

-    I'm still wondering why Toto can't talk. It seems unfair that he doesn't get to say anything.

-    This was the least favorite book of the series for me. I didn't enjoy the characters as much. The old homeless man was crazy!