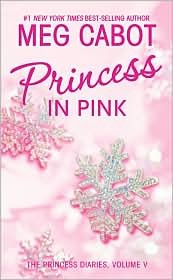 Goodreads Synopsis:    Princess Mia is dreaming about the prom - and contending with a hotel workers' strike - in the fifth, supremely hilarious episode of Meg Cabot's Princess Diaries. This time, Mia's in the pink about the upcoming Albert Einstein H.S. prom, and she's crossing her fingers that Michael will ask her to go. (They're in love, so why wouldn't he ask her, right?) But during Seven Minutes in Heaven at her b-day party, Mia learns that Michael is not the prom-going type. Good grief, what's a princess to do?
To make matters worse, Grandmere has gotten a busboy fired due to a mishap with her pooch, Rommel, at a swanky restaurant, so when all of the city's busboys go on strike, it causes a chain of events that result in Grandmere crashing at Mia's mom's place, her pal Lilly Moscovitz picking up a picket sign, and the prom being brought to a screeching halt. Thankfully, staunch yet boy-wise Grandmere has a plan to change Michael's mind and put everything back on track, making Mia the happiest "prom princess" on this side of the Atlantic - and readers more starry-eyed than Molly Ringwald in her prettiest pink frock. Following up the brief Volume IV and a Half and introducing a new addition to Mia's family, this knee-slapping fifth volume makes the series glitter brighter than ever, placing yet another jewel in Cabot's crown.

-    I'm am SO tired of Mia saying the words "self-actualization" about her and everyone else. I just want to punch her every time those words come up.

-    The one thing I agree with Lilly about is that Mia needs to see a mental health specialist.

-    The majority of the book was Mia obsessing and whining over prom. It was very annoying. There were other things going on in the world besides prom.

-    I liked the Pretty in Pink references.

-    I was not okay with Mia obsessing over getting to 2nd base with Michael, and how her friends had probably gotten farther in that department than her. She just turned 15!?!? Hello! I would not be okay with my freshman daughter worrying about getting to 2nd base or any base with a senior boy who is about to go to college. This really isn't appropriate content for the target audience. How about a princess with some standards? You'd think Mia would learn from her mom being unsafe and everywhere. Geez!

-    Mia's Grandmere may be one of the most frustrating people on Earth, but she comes through for Mia a lot.